On Wednesday, 13 February 2019, the Volkshochschulen (adult education centres) in Germany opened their centenary year with a festive ceremony in 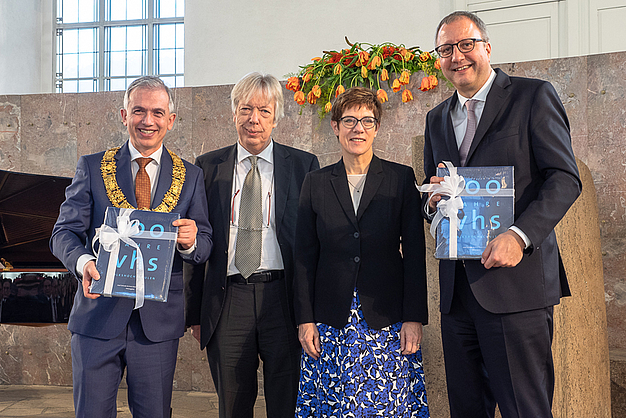 Presentation of the first copies of the anniversary publication on 100 years of Volkshochschule (from left to right): Peter Feldmann, Mayor of the City of Frankfurt/Main, Dr. Ernst Dieter Rossmann MP, Chairman of the German Adult Education Association, Annegret Kramp-Karrenbauer, President of the German Adult Education Association and Prof. Dr. Dr. h. c. Andreas Voßkuhle, President of the Federal Constitutional Court

On Wednesday, 13 February 2019, the Volkshochschulen (adult education centres) in Germany opened their centenary year with a festive ceremony in the Paulskirche in Frankfurt. Prof. Dr. Dr. h.c. Andreas Voßkuhle, President of the Federal Constitutional Court, spoke to around 600 guests from politics, education and civil society about the educational mandate of the Basic Law, the German constitution.
With this anniversary, the Volkshochschulen make reference to the Weimar Constitution of 1919. Article 148, for the first time, called on all levels of government to support adult education and Volkshochschulen in particular. This triggered a wave of foundings throughout Germany: 1919 is regarded as the birth year of the modern Volkshochschule and of continuing education as a public responsibility. It is also the year in which the largest number of adult education centres that still exist today were originally founded.
For the past 100 years, Volkshochschulen throughout Germany have been indispensable places for democratic education, where people of different origins and orientations meet to learn with each other and from each other. 900 institutions throughout Germany are directly or indirectly supported by cities, municipalities and rural districts, with financial support from the federal states and third-party funds from the federal government. Their approximately 700,000 courses are attended by around nine million people every year. Politicians and civil society recognise that Volkshochschulen make a decisive contribution to breaking down educational barriers and promoting equal opportunities and social cohesion. Proof of this may be that the current coalition agreement ascribes a central role to Volkshochschulen when it comes to plugging gaps in digital education. Counteracting the threat of a digital divide in society is, from the point of view of Volkshochschulen, one of the greatest educational tasks of our time. The Volkshochschulen are therefore calling for a digital education offensive on the part of the federal government.
More information about the centenary year (in German) at: https://www.100jahre-vhs.de